South Lake Dolphins have been fortunate to have excellent coaches over the years with the current team being no exception.

Dorian is an elite level swimmer originating from France who moved to Perth in 2015.

His international career spanned six years from 2006 to 2012 during which time he competed in numerous international meets including representing his home country of France at the World Short Course Championships in Istanbul, Turkey.  During this period, Dorian won 12 medals including five national titles.

Dorian obtained his coaching diploma in 2011 and has trained the pre-elite (15-19 years old) team in Marseille.

Dorian’s passion and enthusiasm for the sport of swimming is unquestionable and he is widely admired by both our members and the broader swimming community. 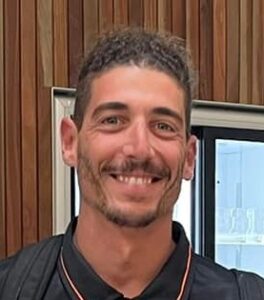 Expanding on our European coaching connections, Stefano joined SLD in the Senior Squad Coach role in April 2021.  Stefano hails from Italy and arrived in Western Australia in late 2016 after a 2 year period in the UK.  Stefano is an accredited Development (formerly Bronze) coach and has 8 years of coaching experience, the majority of which was gained while in the UK and in Western Australia.  He is also a qualified fitness instructor having obtained his Cert III and IV in fitness while in Australia.

Stefano is a former competitive swimmer as part of the A.S.D Rosetana Nuoto in Italy specialising in freestyle and backstroke.  He has helped many swimmers to achieve their goals in competing at both State and National levels in three different countries. Stefano’s passion for swimming and his desire to help all of his swimmers achieve their goals is evident from the very first time you meet him.

Stefano’s motto and advice to all his swimmers is:

Southlake Dolphins have a long tradition of coach development, particularly in encouraging senior swimmers to give back to the sport through assistance coaching roles.

As with our swimmers Southlake Dolphins are committed to support our coaches to achieve their maximum potential through providing and supporting development opportunities for all levels of coaching as outlined below.

Coach development plans will be established and reviewed annually.

In recent years, our coaches have sought development through a variety of pathways including: 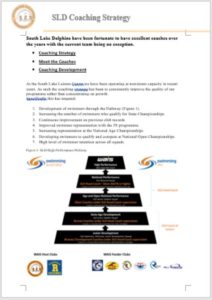